Eve: God’s Plan for the Redemption of Sin 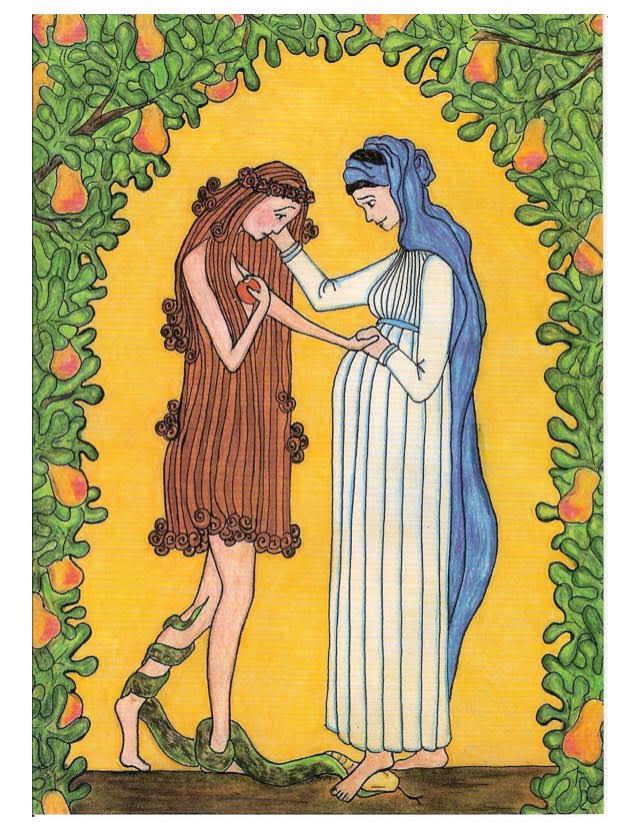 The serpent was the shrewdest of all the wild animals the LORD God has made. One day he asked the woman, “Did God really say you must not eat the fruit from any of the trees in the garden?”

“You won’t die!” the serpent replied to the woman. “God knows that your eyes will be opened as soon as you eat it, and you will be like God, knowing both good and evil.”

The woman was convinced. She saw that the tree was beautiful and its fruit looked delicious, and she wanted the wisdom it would give her. So she took some of the fruit and ate it. Then she gave some to her husband, who was with her, and he ate it, too. At that moment their eyes were opened, and they suddenly felt shame at their nakedness. So they sewed fig leaves together to cover themselves.

When the cool evening breezes were blowing, the man and his wife heard the LORD God walking about in the garden. So they hid from the LORD God among the trees. Then the LORD God called to the man, “Where are you?”

He replied, “I heard you walking in the garden, so I hid. I was afraid because I was naked.”

“Who told you that you were naked?” the LORD God asked. “Have you eaten from the tree whose fruit I commanded you not to eat?”

The man replied, “It was the woman you gave me who gave me the fruit, and I ate it.”

Then the LORD God asked the woman, “What have you done?”

“The serpent deceived me,” she replied. “That’s why I ate it.”

Earlier this year, I had the opportunity to travel with my elderly father to Kentucky to visit the Creation Museum as well as The Ark Encounter. As my father and I walked through each exhibit, we were reminded of God’s great love for mankind and how all of history displays God’s plan of redemption for His people.

One of the last exhibits in the Ark Encounter was a wall display of “Adam’s Synchronology Chart or Map of History”. This 23-foot long chart covers a 6,000-year time span between creation and the early 19th century. We were so fascinated by this chart and spent so long looking at it. One thing that caught our attention was that Adam and Methuselah (Noah’s grandfather) were actually alive at the same time! In fact, they lived 243 years together. When we discovered this, we started imagining the conversations they might have had together. Methuselah: “So, great, great, great, great, great-grandfather, what was it like in the garden? Why did you have to eat that fruit?!?” Adam: “Well, I sure wish I could take that back. Nothing has been the same since…”

We don’t know how long Eve lived after she and Adam were banished from the garden. We do know that Adam was 130 years old when Eve bore him Seth and that he lived another 800 years and had other sons and daughters. (Genesis 5:3-5) I suspect that Eve lived a very long life along with Adam. Imagine, over 900 years to reflect back on your life and your sin. Imagine seeing first hand the consequence your sin has on all of mankind. Looking back, it appears as if the consequence of Eve’s sin is greater than anything we can imagine.

But all sin has great consequences. All sin separates us from our loving heavenly Father. Some sins even have consequences that extend out generations beyond our lives. How did Eve find any hope in light of her sin? How do any of us find hope in spite of our failures and sin?

Jesus is our hope and the fulfillment of God’s redemption promise!

In the middle of God’s judgment and curse following Adam and Eve’s sin, God offers this promise of redemption. In his judgment of the serpent in the garden God says:

God’s curse of the serpent was also a promise to Eve that one day her descendant would redeem mankind.

Our Pastor, Justin Miller, recently said something that relates to this…

” For every lie the devil feeds us, God has a truth that can free us.”

Out of Eve’s failure, God brought about something beautiful both for her good and for His glory! The devil deceived Eve with a lie, but God immediately set a plan of redemption into motion through Jesus.

Jesus’ sacrificial death is of infinite worth. It is a gift of life to each of us! Satan may have struck Jesus’ heel at the cross, but Jesus crushed Satan’s head and redeemed every person who puts their trust in him.

I love this comparison James Nicodem makes in his book “Epic”:

There’s another hint of redemption in Genesis 3, which can be observed only through the lens of the Christian faith. When Christians celebrate Jesus’ death at Communion services (also known as the Eucharist or Lord’s Supper), the bread that they eat represents the body of Christ. His body was hung on a cross to pay for our sins. When Jesus first taught His disciples how to celebrate Communion, He handed them the bread with these words: “Take and eat; this is my body” (Matthew 26:26). Take and eat. Where else are these two verbs coupled together in Scripture?

In Genesis 3:6, we read that Adam and Eve “took…and ate” the forbidden fruit, introducing sin and death into the world. What a disaster! But help was on the way. One day Jesus Christ would arrive on the scene. And just before He gave His life for us, He would break bread with His followers and say: “Take and eat.”

The next time you share in the Lord’s supper, remember how God’s plan for redemption started long ago in the garden with Eve. In spite of her sin, God transformed her story into the beginning story of our redemption. Even though we “take and eat” of sin every day, God still invites us to “take and eat” forgiveness, grace, and mercy in communion with His Son.

Pray:
Heavenly Father, thank you for Eve and how you loved her and used her as the beginning of your redemption story. We fail you so often, but find our hope in that same love you showed Eve. Take our failures and transform them into stories of redemption that glorify you…

Michele is married to the love of her life, Jeff. She has 3 grown children and 1 very sweet grandson! Most days you can find Michele laughing with good friends, working with numbers, writing, or working with women. In the evenings, she enjoys spending time in a few creative outlets like creative lettering, drawing, and pottery. She loves snuggling with her dog, Tebow, and reading. But one of her favorite passions is playing with her grandson and laughing at his bright smile! You can find her most weekends worshiping at our Real Life Clermont campus.